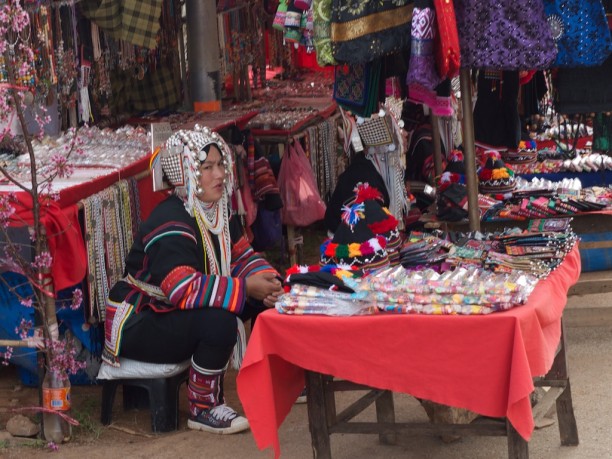 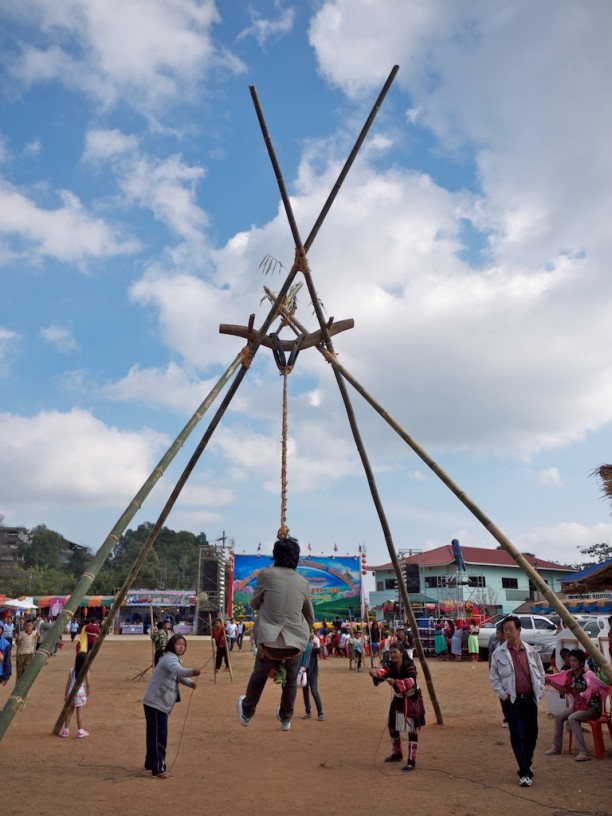 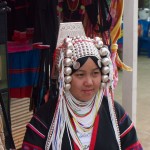 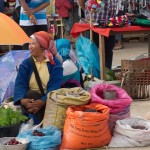 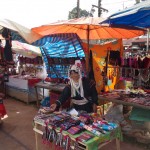 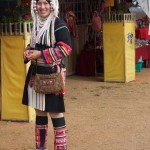 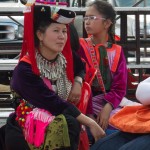 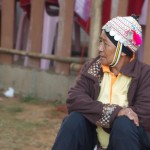 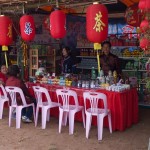 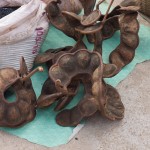 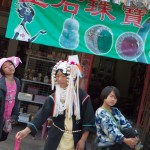 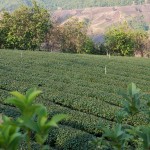 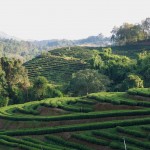 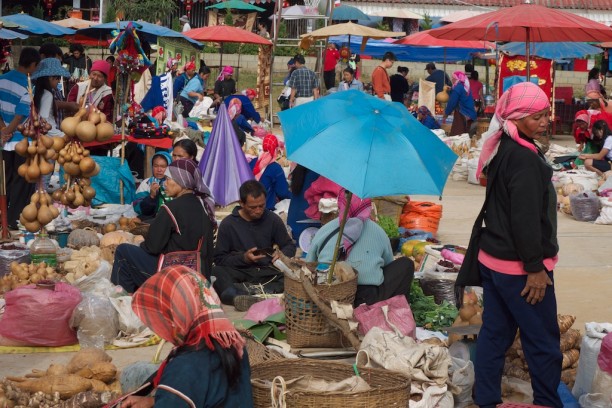 The term Hill Tribes refers to those populations who migrated to Thailand, Burma, Laos and Vietnam from southern China, usually from Yunnan, or Tibet in the past centuries.
Most of these tribes come from a heritage of subsistence farming and slash and burn agricultural techniques. This means caring after the few animals that feed their families and cutting trees from forests in order to create fields.
They also used to migrate, leaving behind the land when it became sterile and overused.
In recent years, the Thai government had to implement new regulations to prevent the depletion of its territory. As a result the Hill Tribes had to change their agricultural habits.
Aside from these changes their way of life is still very similar to what it’s been for centuries.

We were lucky enough to visit a few villages a couple of years ago. The trip was organized right from the hotel in Chiang Rai. (Le Meridien). We booked a guide and a car. The tour was a day long and included the visit to three villages, a short boat trip to an open market in Laos, on the other bank of the river Mekong river and a two hours drive to a tea plantation village (Santikhiri).

The day was a full immersion in one of the most exotic settings a westerner will ever experience: the colorful dresses and textiles, the intricate head pieces of the villagers, scorpion and cobra infused liquors, the fragrance of green tea leaves…

We started the day by visiting a Yao village near Chiang Rai. The Yao people inhabit China, Vietnam, Laos and Thailand. There are around 50,000 Yao in Thailand plus another 10,000 Yao refugees from Laos, living in refugee camps. The Yao villages usually feature wood planks houses built along a dirt road. The Yao are the only hill tribe that uses a written language. Polygamy is accepted among tribe’s members.The women are incredibly skilled at needlework. Their abilities is visible in the embroidered  trousers (which can take up to a year to complete), turban, jackets and caps. Yao men are accomplished silversmiths. The most important ceremonies are New Year (celebrated at the same time as the Chinese New Year) and weddings. The weddings are very expensive to prepare and feature incredibly elaborated headdress for the brides. For this reason compatibility between bride and groom is always checked by the village astrologer. 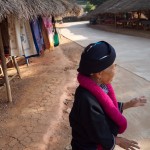 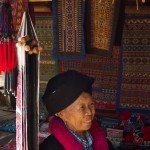 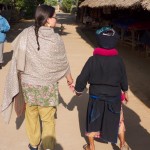 We continued our trip by driving to an Akha village.
The Akha people descended in to South East Asia from China in the early of 1900s. Around 1930 a large part of the population immigrated from Burma and Laos, pushed by bloody civil wars in the respective host countries.
Currently the population is around 400,000 , subdivided into different subgroups that speak different languages and do not mix with each others. The typical habitat consist in small villages at high altitudes. The contact with globalization and capitalism has changed in several cases the type of dwellings which now span from traditional log houses to more modern and westernized ones.
The society is basically egalitarian, with importance and respect given to the elders and more experienced members.
The belief system is a mixture of animism and ancestor worship . The creator gave the Akha the Akha Zang, an orally transmitted set of codes and rules that regulates their daily life. Great emphasis is placed on respecting human beings and natural resources.
Two of the most important celebrations are the Swing Festival in late August, also known as the women’s New Year and the Men’s New Year which coincides with the traditional New Year in late December. The swing is one of the most important features in a village. It’s built every year for  the festival and it’s used for offerings relating to the fertility of the rice. The elder that build the swings is called the Dzoeuh Mah.
The Akha clothing are spectacular. The dominant color is the indigo. Women spin the cotton thread by hand and then weave it on a foot-treadle loom. Jackets, hats and shoulder bags are regarded as works of art because of the intricate embroideries. The women headdresses are the most elaborated pieces in their wardrobe. They are made from cotton, and embroidered and decorated with colored beads, silver balls, strands of colored wool, shells, long red boas, tassels, bird feathers, silver coins and bells. 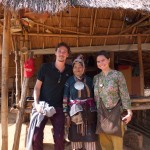 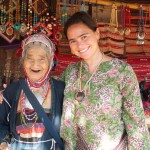 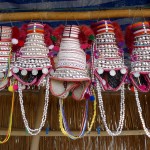 The day continued with a trip to the Golden Triangle vista point, more about this in the next post…

The last village we visited was inhabited by a tribe of Kayan ethnicity.
The Kayan, a sub group of the Red Karen or Karenni people, leave primarily in south and south east Myanmar, but a fairly large number also emigrated to Thailand due to conflicts with the Burma military regime.
The Kayan group is subdivided in more groups. The Kayan Lahwi sub group is famous for the neck rings wore by the women. The brass coils are applied to girls when they are five year olds and subsequently added as the girls get older. The coils give the impression of an elongated neck, but in reality the illusion is created by a compressed rib cage, under the weight of the metal  rings.
Everyone in the village was extremely sweet, there was an obvious sense harmony permeating every little house. Kids running around playing, being funny and obviously accustomed to tourists. 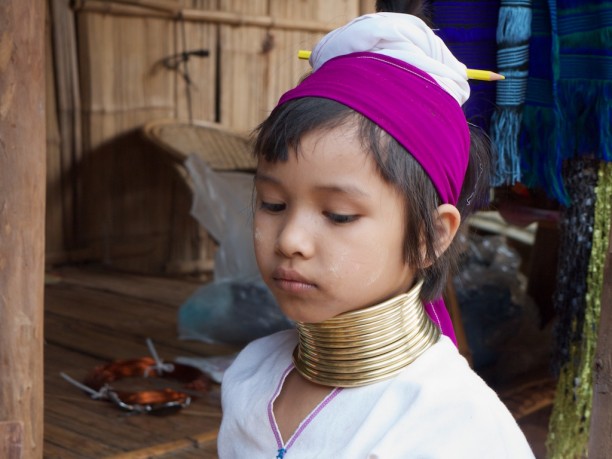 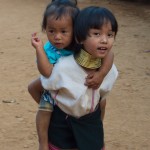 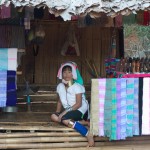 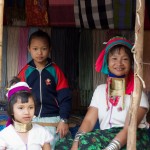 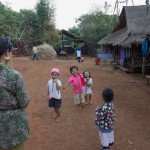 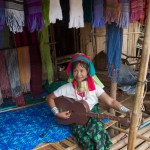 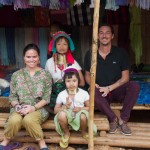 I really wish we’ve had more time to visit the Hill Tribes area in depth…a great excuse to go back soon.

I even got to play an hand made 4 strings guitar that belonged to an amazing local singer! Checkout the very unimpressed look of both mother and daughter…